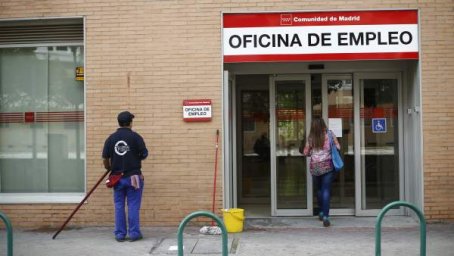 Unemployment in Spain will drop to 15.4% in 2018, but still with a lot of temporary employment, according to the ILO

The International Labor Organization estimates that unemployment will be reduced by two percentage points, standing at around 3.5 million people. He adds that employment will grow throughout Europe and especially in Spain and Greece, the two countries most affected by the economic and financial crisis. Remember, however, that the number of unemployed remains very worrying and that high levels of unwanted temporary work are maintained.

An employment office in Madrid

Unemployment in Spain will be reduced by two percentage points in 2018 and will be located at 15.4% of the active population, about 3.5 million people, according to estimates by the International Labor Organization (ILO). This body presented its report on Social and employment perspectives in the world, Trends 2018, on Monday, in which it maintains that the improvement in employment will occur throughout Europe and, especially in the two countries most affected by the economic and financial crisis: Spain and Greece In both nations, reductions of two percentage points are expected, up to 15.4% in Spain and 19.5% in Greece. Thus, the number of unemployed Spaniards in 2018 should be 3.5 million, and fall to 3.2 million in 2019, the report specifies. The ILO estimates that unemployment levels in the European Union (EU) will drop to 8.1% in 2018 and up to 7.8% in 2019, which means a drop of 1.5 million unemployed by 2019.

In 2017 the EU unemployment rate stood at 8.5%, the lowest level since 2008. This improvement in the labor market is essentially due to the significant growth of the European Gross Domestic Product (GDP), which increased in 2017 by 2.1%, while in 2016 it had progressed 1.8%. The predictions indicate that the growth of the EU GDP in the next two years will be 1.8% in 2018 and 1.6% in 2019. Specifically for Spain, the ILO estimates that growth will slow down, but «will continue above 2% ». Long-term unemployed «Spain shows an improvement in global unemployment figures, but still very worrying high levels of unemployment. And of course, they also have the big problem of the nature of the contracts of those who work, such as high levels of unwanted temporary work, ”said ILO Director General Guy Ryder at a press conference. Despite this good news, the ILO specifies that the drop in unemployment rates has not substantially modified long-term unemployment, «which remains high in most countries.» In the EU there are currently 8.5 million long-term unemployed, with 63% unemployed for two years or more. More than 40% of all unemployed people in 18 of the 28 EU countries are long-term, and in another eight nations it exceeds 50%, the study emphasizes. «While the developed world is in pre-crisis levels of occupation, the issue of long-term unemployed is very serious, and requires more attention from European governments and specific policies to help these people,» Ryder said. Also, the report highlights that there are 8.8 million people who could be working but not looking, to which we must add about 2.3 million who were looking for a job, but who did not get it in the short term, given their responsibilities Family or student. These two combined categories, which the ILO calls “potential workforce,” form more than 11 million people who are not considered active population despite having expressed interest in working. Part-time work On the other hand, the report also refers to part-time or temporary work, and highlights that the percentage of involuntary part-time workers is more than 70% in countries such as Spain, Italy and Greece. It also indicates that more than 54% of temporary workers — who represented 14.4% of all jobs in the EU in the second half of 2017 — are considered involuntary, given the inability of those who hold them to find a permanent job. The report estimates that the global unemployment rate stood at 5.6% in 2017, and that it will fall to 5.5% in 2018, marking a turn after three years of ascent. The study attributes the positive trend registered between 2017 and 2018 to the good performance of labor markets in developed countries. Despite this, given the increase in people seeking employment, the total number of unemployed people is expected to remain stable in 2018 at more than 192 million.