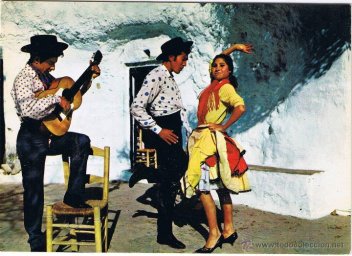 Maybe this enigmatic people still think, generally, forming a unit with only circumstantial ethnic differences caused by the experiential situations to which they have been forced.

Indeed, Roma from France, Hungíra, Germany, Romania, etc., show linguistic, social and other differences, which can not be, or could be, decades ago, considered essential to distinguish them beyond those differences that they hold, and are imposed by the tribes to which each belongs since time immemorial. But ethnicity is the same in any case.

The Spanish gypsy, however, although relative of rest seems even ethnically distinguished from those more numerous. Historians and researchers have yet to figure out the mystery of the origin of these ancient nomads, and there are few Spaniards, who, like Jose Carlos de Luna, have reached conclusions concerning yes, but explicit, that the Spanish gypsy is «else», perhaps descended from the Dacians or xetas, one of the people they could find shelter in the Iberian Peninsula — in its southern — in ancient times, with Iberians, Persians, Phoenicians, Greeks, Carthaginians, Romans and Scythians or getas.

The other gypsy is, at least in appearance, by comparison, originating in India. His skin is tanned and even more definitely black or very dark, the kind of lout and other black or Negroid races that immense continent, country today. Said Jose Carlos de Luna, Spanish gypsies thought descended from the emigration of a Sumerian-Akkadian people first installed in the vicinity of Egypt, and then expelled (perhaps by Ramses III) and forced to seek other lands. He says that such Gypsies only in Spain. In the south, in Andalusia.

The other Roma arrived more recently to Spain through France. They are called in Spain Hungarians and Gypsies. They came from Central Europe and its features, by comparison, they are easy to assimilate certain Indian ethnic groups. Of course, these Hungarians, the wagons and mysteries; dancing bears, notoriety and other legends of all kinds, Spanish gypsies were assimilated (and not vice versa), to be confused with them… apparently. Because the gypsy -español — Betis, once a certain animosity felt by the Hungarian, for those «black men Zend» (hence the term possibly Gypsies).

The Spanish Gypsy or Bético is therefore thing apart. In a way it is established and for centuries belongs to the history of Spain and the Iberian Peninsula.

It has not ceased to be nomadic at all, but compared to European gypsy Indian origin, we can say that Betis has come to settle. In cities like Barcelona and Madrid, they take part in certain neighborhoods for several decades. The well-known Madrid neighborhood of Lavapies, old Jewish quarter and Moorish quarter, home to many diabetics gypsies of the purest, ethnically speaking, they have been integrated, not without difficulty, with the rest of payo neighborhood, until the appearance of the latest waves of immigrants Eastern and Maghreb end that they have currently busy number.

As for music, the Arab-Andalusian folklore bears the imprint of gypsy Betis as in certain genres and styles can be said that are specific to them, although they have to be in Andalusia. The so-called «flamenco» is put together, mostly of Roma origin. This has enriched their own songs and music. The substrate musical Gypsy origin is in Spain, no doubt.

And a good example of this are the following: The debla, the light, the ram, the gypsy seguiriya, bolt, and even soleares, so admired by the poet Manuel Machado. Toná is also the gypsy, who looks like the seguiriya and as the ram is accompanied only by the cadence of the hammers on the anvil where the iron red or bright white Domena. It is singing forge, which was the blacksmith, the favorite office of Spanish gypsy, and even European, famous for its quality and brilliance.

These mentioned are some types of «singing», known among true connoisseurs, beyond the clumsy parody dedicated to tourists as «fans» little or nothing demanding.

More than famous, mythical, were singers like Enrique Ortega and Manuel Torres, Manolo Caracol, Paco de la Luz, etc. Like singers (which in this among the Hispanic gitanería fewer machismo is said). There are so many famous singers as men, but above all, dancers Rita Ortega, Concha Carboneras, the Camboria, etc. A la Serra, singer, owed songs like this with a KEY with both «he sabó ...» closes:

gypsies
—
Spain
RSS
No comments yet. Be the first to add a comment!
Log in or Register to write comments
Related
Regional Spain