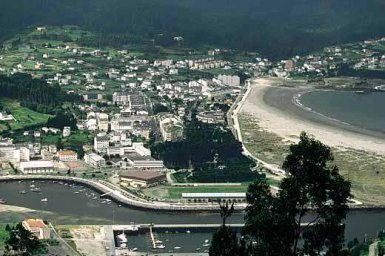 The northwest corner of Spain is the wettest and, because of this, also the greenest region of the country.

The medieval city of Santiago de Compostela draws large numbers of visitors as it stands at the end of a legendary pilgrimage route and centres on an aweinspiring cathedral. The other great attraction is the long, heavily indented coastline.

One stretch of this, the Rías Baixas, has just the right blend of beaches, low-key holiday resorts and scenery. Inland, Galicia has hills, meadows, forests, monasteries and handsome old towns where time seems slowed down and you can be sure to get away from the crowds. 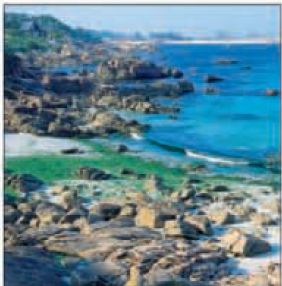 For a church visit like no other, head to Ribadeo, on Spain’s northwest Galician coast, where wave-carved, hundred-foot rock arches resembling flying buttresses of Gothic cathedrals line the sand. Walk among them at low tide, but beware, when the Bay of Biscay rises, the beach quickly succumbs to the surf.

As Catedrais beach translates as ‘Beach of the Cathedrals’. It is the turistic name of Praia de Augas Santas. The Spanish beach is located in the Ribadeo municipality, in the province of Lugo, on the Cantabric coast, and it lies about ten kilometres to the west from the town of Ribadeo. Its name is derived from the formations of its cliffs.

It has been declared a Natural Monument by the regional Ministry for the Environment of the Xunta de Galicia.

The place’s more characteristic features are its natural arches and caves, which can be seen only in low tide. During high tide, the beach appears quite small, but is still suitable to go for a swim. High tide is an interesting time to visit the place and wander over the top of the cliffs, from West to East, heading to the Esteiro Beach. During low tide you can appreciate the size of its magnificent cliffs and the picturesque sea caves, which go from small cracks on the rock to big caves whose roofs collapse due to the erosion of the waves. Also during low tide you can gain access to a sand deposit delimited by a rocky wall made from slate and schist of strange and complex forms: more than 30-meters-tall arches which remind to cathedral flying buttresses, dozen-meters-long caves, sand corridors between rocky blocks and many other curiosities. When low tide is lower than usual, you can access the nearby beaches through the sand extension. However, it is advisable to be back before the water starts to cover the beach again, which happens very quickly, since the coast stretch is almost horizontal.

The 'Praia As Catedrais' in Galicia is one of the most beautiful natural landscapes in northern Spain. These spectacular cliffs and caves are reminiscent of medieval Gothic architecture and make this beach one of the most surprising in Europe. 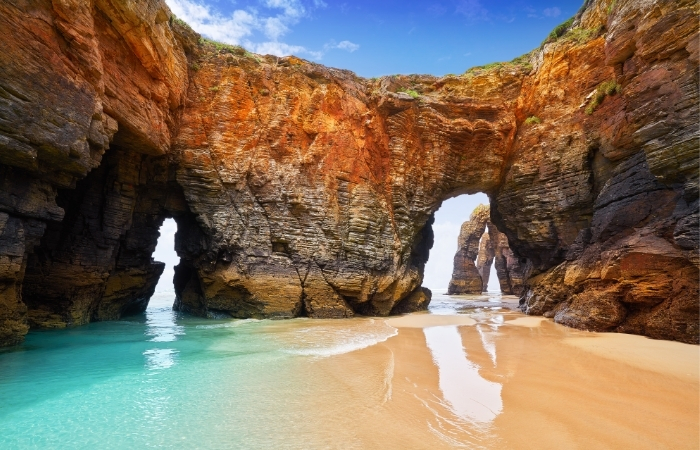 This lighthouse is located in Galicia, in the Corcubión estuary. Barely protruding a few meters above the sea, it sits in waters that are usually wild. In the picture, we can see a rare moment of calm.