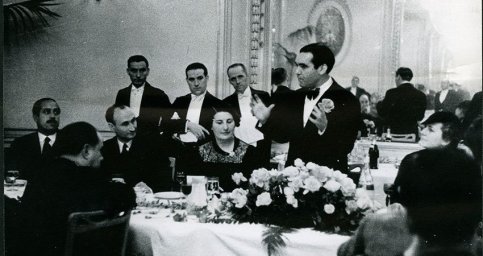 In Russia Federico Garcia Lorca is loved by all. The number of translations there, the many studies published about his life show us their popularity. It is reputed to be the most «our» all foreign poets. Why such fame? There are many reasons for this.

First, his poetry is very precise and expressive. Each poem of his is made very accurately. Himself once wrote that «if it is true that I am a poet by the grace of God — or the devil — I also am so by the grace of technique and effort.» Contributing to this, largely, its deep roots in the popular. Popular and cult are always married in his work. Furthermore, his death at the hands of the fascists made her name a symbol of the fight against fascism.

Lorca's personality is extremely attractive. On the one hand, it is cheerful and full of sympathy. Other — deeper — it has a discomfort, pain of living, a feeling if tragic fate. The theme of tragic destiny, failure to appear in all performing their masterpieces. His sadness has a lot to do with sadness that Russia seeks death at the party. It is logical that both Lorca's poems as the Russian tradition idealizes the Roma, symbol of freedom.

But it should be noted that apart from romanticism, Lorca has come to appreciate the reality. His short poems describe accurately the desert landscapes of Andalucia, villages lost in the mountains and the streets of Granada.

Lorca has lived an intense life. He was born in Fuentevaqueros in 1898. In Granada he began racing Arts and Law (only finished second). He also studied music with passion and was a friend of the famous Manuel de Falla. Along with him later he organized the first contest of flamenco singing.

Soon he moved to Madrid, where he meets young artists (Dali, Bunuel) and established writers (Juan Ramon Jimenez, etc). In 1929-1930 he moved to New York, which give title to his future poetic book. Back in Spain founded La Barraca, a university theater group. He walks with the people representing classics and collecting folklore. As a musician, he harmonized many popular songs. Their growing closer to the people and their love of freedom against all forms of dictatorship will attract hatred that lead to his assassination at the beginning of the Civil War, in August 1936.

Among his works are: «Gypsy Ballads», «Poet in New York» tragedy «Blood Wedding» and «Yerma».

—
Spain
RSS
No comments yet. Be the first to add a comment!
Log in or Register to write comments