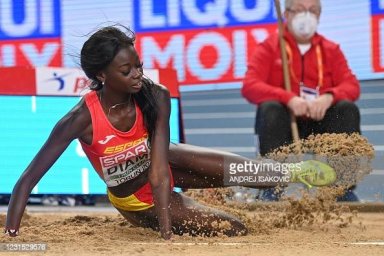 In the summer of 2015 she participated in the European Junior Championships in Eskilstuna, winning bronze with a jump of 6.55 meters, behind the Romanian Florentina Marincu.

The measure would be a new personal record, but the wind is 4.0 m / s and the jump can not be approved as a record.

Starting from the 2017 season, Fatima also began to devote himself to the long jump. She then competed at the European Under-23 Championships in Bydgoszcz, where she reached the final of the triple jump landing at 13.44 meters.

Fátima Dzinzaletaite Diame Diame, jumper, jump
—
111
Spain
Tweet
RSS
No comments yet. Be the first to add a comment!
Log in or Register to write comments
Ads