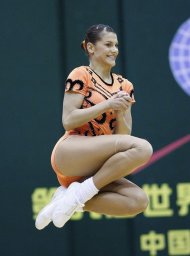 However, one interesting thing is the mix of different cultures. And it is gratifying that there are still such smart journalists in the world who, having heard, for example, the name «Elmira Dasayev», do not rush to question her lover about the Russian cold.

This 19-year-old Spanish gymnast of Russian origin, specialized in sports aerobics, was recognized last year as the best athlete in Aragon. And this year the correspondent for the Heraldo de Aragón asked Elmira to talk about how she celebrates the Fiestas del Pilar. «Elmira was born in Moscow and has lived in Zaragoza since she was six years old. The earliest memories of her from Zaragoza are associated with giant puppet characters in the streets during holidays. „And when she was a schoolgirl, we went to all our rhythmic gymnastics groups to put flowers for the Virgen del Pilar. We thanked him for everything we were able to accomplish," Elmira said.

The daughter of the famous Soviet goalkeeper Rinat Dasayev and former Almaty gymnast Nelly Gaas — Elmira, won the World Cup in aerobics on March 12 in France.

Elmira Dasaeva speaks for Spain. She is 20 years old. She is the brightest star in the world of aerobics, the overall winner of the World Games (analogous to the Olympics in sports, not included in her program — author's note) 2005.

Elmira is one of two daughters of the famous goalkeeper and former leader of the Kazakhstan national team in rhythmic gymnastics Nellie Gaas. In the life of Rinat Dasayev she entered in 1983. In the late 80s, the family went to Spain, where the goalkeeper of the USSR national team signed a contract with the club «Sevilla». There, on Spanish soil, there was discord. Dasayev returned to Russia. Haas stayed in Spain. He now has another family and his own rhythmic gymnastics school in Zaragoza. And his sporting traditions are continued by Elmira's daughter.

Elmira Dasaeva was on the verge of not taking part in the best women's singles final due to a knee injury that has been asking for rest for months. At the last moment she decided to get out of it, and the current World Cup champion took silver in the European Championship in Hungary.

Elmira, also silver in 2005 and third in the world in 2006, achieved 20.65 points, one tenth behind the champion, the Bulgarian Lili Yordanova (20.75). Sara Moreno, pressured by her good overall competition, finished seventh (19.85); If she had repeated her performance in the first phase (20.90), she would have been champion.

Rinat Dasayev could not even imagine, in the most terrible dream, that one day he would not be informed about the adult life of his own daughter. Witnesses recall that in the late 1980s Dasayev, with fatherly love, took care of his little daughter named Elmira. As you know, Dasayev completed his career in Spain, playing for Sevilla. After several years of timelessness, Rinat Feizrakhmanovich returned to his homeland, and his ex-wife, the famous gymnast Nelli Gaas, stayed in Spain with his two daughters, Elmira and Christina. Elmira was Dasaev's eldest daughter from his first marriage. At one time she even became the champion of Spain in gymnastics. When age began to press on Elmira, she switched to sports aerobics. In 2005, Elmira in Duisburg won the medal at the World Games, speaking on behalf of the Spanish team. Our glorified gatekeeper, the story of the change in citizenship of his own daughter was taken by surprise.