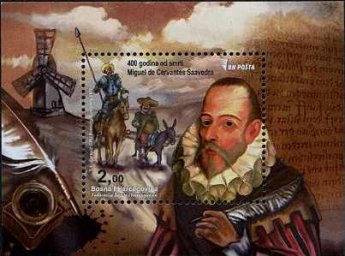 Sure you know. He is the author of «Don Quixote,» but not only wrote a book of stories, his own life was an adventure.

Born in Alcalá de Henares (Madrid) in 1547. His father was a surgeon. He lived in several Spanish cities. When he was 22, he went to Italy and participated in the Battle of Lepanto against the Turks. A wound left a useless arm. Hence his famous nickname «El Manco de Lepanto».

Tired of war, he decided to return home. In 1575, when he returned to Spain with his brother Rodrigo, his ship was captured by Turkish pirates. He was taken to Algiers, where he spent five years in captivity. In vain he addressed several ministers from Spain for help. We saved some monks, who paid him a large sum, and returned to Spain.

Once at home, he began to write plays for a living. But he failed. At 37 she married; their marriage was not happy.

Finally, he decided to work on tax collector. But bad luck continued accompanying him. He was imprisoned several times, and always for unfair reasons. Knowing this, you can miss the humor with which describes the tragic moments of his life.

In 1604 he moved to Valladolid and after a year he published the first part of «Don Quixote». So he earned enemies among literary people, unable to get off the hook. During the following years he worked odd jobs and published poetry, comedies and «Exemplary Novels». In 1615, already seriously ill, he finished the second part of Don Quixote. He died in 1616, the same year as Shakespeare.

Cervantes
—
Spain
RSS
No comments yet. Be the first to add a comment!
Log in or Register to write comments