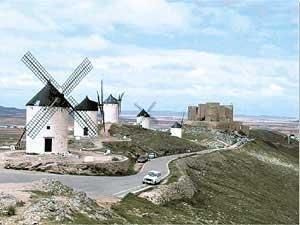 This region is not an obvious choice for many tourists but it does have one of Spain’s most attractive cities – Toledo, crammed with interesting architecture from the Middle Ages. Two unusually sited towns also worth a visit are Cuenca perched on a ravine and Alcalá del Júcar, where some of the houses have been extended into the soft rock of the chalky hills into which they are built.

Although daunting at first, the plains of La Mancha, well known for Spain’s most famous fictional character, Don Quixote, has a certain charm in its quirky landscape of windmills and castles.

Castilla-La Mancha
—
Spain
RSS
No comments yet. Be the first to add a comment!
Log in or Register to write comments
Related