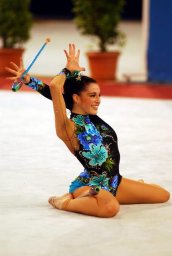 Carolina Rodríguez Ballesteros — Spanish rhythmic gymnast. She considered the Miracle Gymnast. She is an athlete from Spain, she was born in Leon, Spain on May 24, 1986. She is currently 28 years old. She participates in Rhythmic Gymnastics.

This Leonese is the youngest of the three and a hopeful future opens before her. With her attitude (she affirms that «by working she can become an Olympic champion») and her sacrifice, she can go a long way. The World Cup remembers it as «an unforgettable experience», and she does not hesitate to be «very happy» with her performance. Surely in a short time we will see her among the best of hers.

HE STARTED IN GR: at the age of 7: «Because from the first time I saw this sport I fell in love»

MOVIES: Titanic and those of Walt Disney

SPORTS OBJECTIVE: To be an Olympic Champion

— 6th classified by teams in the Budapest World Cup 2003

Carolina Rodríguez Ballesteros, gymnast, rhythmic gymnastics
—
114
Spain
Tweet
RSS
No comments yet. Be the first to add a comment!
Log in or Register to write comments
Ads