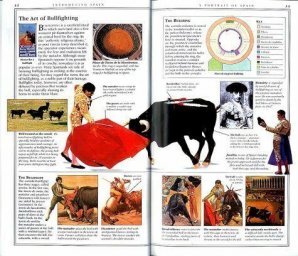 The bullfight (corrida) is above all a celebration. It is celebrated since ancient times and during its history has changed considerably. It confrontation between the bull and the bullfighter had a symbolic meaning, as it was perceived as a wild, strong and aggressive struggle between man and death.

But today this sense is lost. But there are people who appreciate the wild air and know enjoy it. They are the so-called no bull bullfight is not lost. Instead, they say the anti-bullfighting bullfighting is cruel and unfair. The bull has no other support than their horns, while the bullfighter has a whole group of assistants. Only in principle is the bullfighter and the bull face to face. And then comes the turn of the «gang».

The first to come are biting. They are well protected from the bull's horns. Its mission is slightly injuring the bull so that it is weaker and the bullfighter can with him. They are followed by the banderilleros stab the banderillas trying for even more fatiguing. They did run much danger because the flags have to drive to get close to the animal. And although many people who entertain the bull, every year there are fatal accidents.

Responsible for everything that happens in the bullring is ei president of the corrida. Make sure that the rules are complied with and gives awards that may be an ear, two ears and the tail of the bull killed. But actually the one who decides is the public who with their shouts and applause, and their handkerchiefs in the air shows whether the «task» has liked. Also in the event that the bull is lame or invalid, the president must give a signal with white scarf out to do so. For that they released a few tame oxen called «halters» to take the bull outside.

There are almost always three matadors and six bulls, two for each. There are good and very famous bullfighters known worldwide. There are also beginners, like the bull can be rough or gentle. But what matters is the party, the attitude of joyful people, the cries of the public that they forget the simple fact of the killing of a aninfal.

If you want to enjoy the run, do not forget that the season lasts from April to November and even the cheapest tickets are very expensive