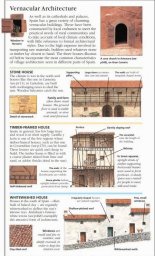 The Roman Empire left in Spain along with their language and rights an important monumental heritage. The most famous monument is the colossal Roman aqueduct of Segovia, which was used to carry water from the mountains to the Roman cities. It is a construction of almost one kilometer long, 30 meters high and 167 arches. In addition to public works such as aqueducts, bridges and ports, the Romans built dedicated to shows, among which the Amphitheater in Merida buildings. Theaters, amphitheatres and circuses of great artistic value are restored and are used today for concerts and festivals of classical theater.

But what surprises most is the heritage of the Muslim era. The Great Mosque of Cordoba and the palace of the Alhambra Moorish kings are two key works of Arabic art. They have some very original features such as arches and columns, painted Arabic way.

When speaking of Moorish Spain or Muslim, there is talk of a long period when lived three populations with different religions, JEWS, Muslims and Christians. The Arabs who remained in Spain after the Christian conquest of the Moorish architecture developed. This unique style came from the combination of (Romanesque and Gothic) Christian elements with the elements and decorative techniques Muslims. To the Moorish style is typical cheap material: bricks, plaster, wood, ceramic tiles and mosaics. Are typical towers like minarets decorations with several floors: brick towers of Teruel and Toledo.

In the twelfth and thirteenth centuries it is introduced into Spain the Gothic style, when the cathedrals of Burgos, Toledo and Leon were built. The Spanish Gothic is unique in combining with Moorish elements. The Gothic civil architecture is developed especially in the Mediterranean area with works like auctions of Valencia and Palma de Mallorca.

The Renaissance in Spain coincides with the end of the Reconquista, with the Discovery of America and the unification of Spain. The Catholic Church used Christianity as the unifying element. Religious and civic buildings were built in the much more ornamental than pure Italian Renaissance style Plateresque. An example of this style is the University of Salamanca.

The Baroque in Spain is characterized by the complicated ornamentation and vivid imagination. Baroque masterpiece is the Plaza Mayor in Salamanca. Additionally in Galicia exceptional baroque boom, called Baroque Compostela, Santiago de Compostela as its center is observed.

Modernism in Spain plays an important role. Modernist architects, especially in Barcelona, revolutionized the traditional schemes. The best known was the architect Antonio Gaudi. Gaudí synthesized arts: architecture including original mosaics and other decorations. His most famous works are the Sagrada Familia, the Guell Park and the beautiful buildings in Barcelona. But the evolutionary movement and continues to this day, you can consider Barcelona as an international center of modernist architecture.