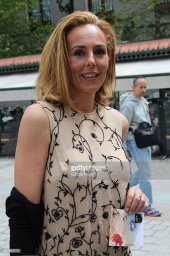 Rocio Jurado in one of her dramatic stage performances

The Spanish diva died at her home in La Moraleja in Madrid at 5,15 this morning. She was 61. Her family were at her side as she passed away.

She has now been taken to the Centro Cultural de la Villa, in the Plaza de Colón in Madrid where the public will be able to pay their respects until 8pm this evening.

Family friends and admirers are paying their respects in ever increasing numbers. Among the famous to do so at the Centro Cultural today are, Carmen Sevilla, Majurita Díaz, Concha Velasco, Marta Sanchez, Pedro Almodóvar, Flores, Francisco, Ana Pastor, and Maria Teresa Campos among many many others. The coffin is closed and draped with both the Spanish and Andalucian flags.

Her brother Amador said that she died ‘very quietly and without anguish, surrounded by her family as she had wished’.

She was diagnosed with pancreatic cancer two years ago and had suffered a series of health problems since then.

Together by her side were her bullfighter husband, José Ortega Cano, her brother and sister Amador and Gloria Mohedano, and her older daughter, Rocio Carrasco.

María del Rocío Trinidad Mohedano Jurado, was born in Chipiona in Cádiz in 1944, she was known simply as ‘La más grande’ – the biggest – because of the power of her voice, and sang a mixture of traditional flamenco and copla with an over the top stage presentation.

The scene in the Centro Cultural de la Villa in Madrid

The King, in the name of the entire royal family, has sent a telegram of condolence to the family, and he spoke personally on the phone with José Ortega Cano.

The Deputy Prime Minister, María Teresa Fernández de la Vega, commented that the singer had fought through her youth and managed to reach the great majority of the Spanish people with her art.

The Leader of the Opposition, Mariano Rajoy, said it was very sand news for the Spanish people who had enjoyed seeing her perform on television and elsewhere, describing her as one of the most important artists ever in Spain.

The Mayor of Madrid, Alberto Ruiz Gallardón, has said that street in the capital where she lived for some time would now be renamed in her name.

The Rocio Brotherhood from Chipiona, who are currently on the pilgrimage to El Rocio say they will dedicate a rosary and a mass to the singer tonight.

«Life is the biggest spectacle in the world. We don’t realise that until we are about to lose it.»

Always on the cover of the gossip and society magazines, Rocio Jurado was always open about her health problems.

In her last TV interview, given in January to the journalist, Jesús Quintero, 'La Chipionera', as she was known, said ‘Life is the biggest spectacle in the world. We don’t realise that until we are about to lose it.’

The body of Rocio Jurado will be taken tonight to Chipiona, the town where she was born, where the funeral will be held tomorrow at 5pm in the San José municipal cemetery.

There is no doubt that her death will dominate all Spanish news channels for several days.

Readers are invited to leave their tributes below:

Rocio Jurado
—
Spain
RSS
No comments yet. Be the first to add a comment!
Log in or Register to write comments