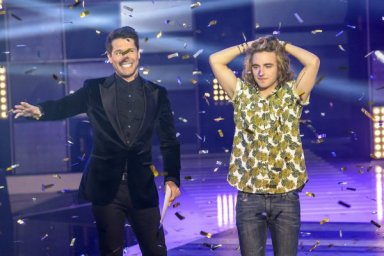 In Spain, the national selection of «Objetivo Eurovision 2017» was completed. In the finale of the competition, the young Spanish performer Manel Navarro won, who will represent the country at the Eurovision Song Contest 2017.

In the finals, 6 participants fought for the victory. After counting the votes, the singer scored the same number of votes with performer Mirela.

As a result, the best choice was for the representatives of the jury who voted for Navaro.

The Spaniard will perform the song «Do It For Your Lover».

20-year-old singer Manel Navarro — the participant from Spain at the Eurovision Song Contest 2017.

As Spain is one of the «Big Five» countries, Manel's song contest is on the way to the final with his competitive song «Do It For Your Lover».

The provocative performance of our Spanish guest Manuel Navarro — you can estimate the degree of his competitiveness yourself:

Three days ago at the dramatic final of the national selection the representative of Spain at the Eurovision Song Contest-2017 was determined. They became 20-year-old Manuel Navarro. Singer, poet and guitarist.

Young Manel has already released two singles. With his newly released song «Do It for Your Lover» Navarro will go to fascinate the public of Eurovision.

The meaning of the song, to which the audience will dance in the International Exhibition Center, is no wonder. If you do not want to do anything, even laziness to get out of bed — do it «for the sake of our love.»

Manel Navarro, Do it for your lover, Eurovision
—
Spain
RSS
No comments yet. Be the first to add a comment!
Log in or Register to write comments
Related news