Home in Spain? Thank you 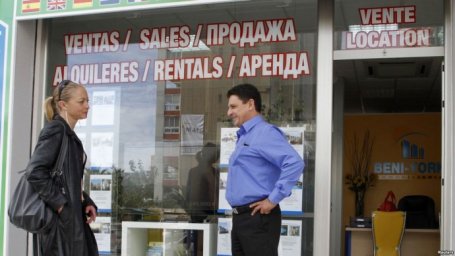 The Spanish specialized publication El Economista notes that over the past summer season, the number of holidaymakers from Russia coming to Spain has steadily declined. So, in June it decreased by almost 14% compared to the same month last year, in July — by 18, and in August — by 20%. Another influential publication — Excite — says through the mouth of analyst Mary Rey that over the course of 12 months, the reduction in the number of Russians traveling can be 40% compared with 2013, when 1.6 million Russian citizens visited Spain.

One of the Spanish real estate agencies. Signs in Russian have become an indispensable attribute of this business.

It would seem that this loss is not so great for the Spanish tourism and leisure industry, given that more than 60 million foreign visitors visit the country annually. However, the Russians were still considered one of the most profitable customers. According to statistics, each of them spent an average of 139 euros per day, while spending, for example, the French accounted for 79, the British — 95, and the Germans — 99 euros. This is due to the fact that tourists from Russia, unlike the Western Europeans, made many purchases in Spain — purchased clothes, jewelry and so on. According to the newspaper El Periodico, last year the Russians spent in Spain a total of 2.3 billion euros.

The percentage of Russian citizens purchasing property in Spain has even more declined in percentage terms. According to official figures, in 2012 they made 4.5 thousand such transactions here — mainly in the areas of sea resorts — at an average price of 318 thousand euros for housing. There is no data for the past year, but it is known from unofficial sources that the growth of Russian investments could then increase by 15 percent. This year, according to Radio Liberty, the Russian realtor working in Valencia, Irina Novikova, there has been a landslide drop in sales. In September, they were practically reduced to zero. “I think that by the end of the year their total number will decrease by no less than 60%,” said Novikova.

For the Spaniards, the loss of Russian clientele is an unpleasant surprise. Says Rafael Rodriguez, a member of the regional government of the Andalusian region in southern Spain, where in recent years the benefits of the influx of Russians have been especially felt:

— The Russian market is extremely important for us. We would like to continue to work with him to increase the number of trips of Russians. We are sure that the negative situation that has arisen now will disappear. The situation is stabilizing, and the Russians will again choose Andalusia as a favorite vacation spot.

Speaking about the same “negative conjuncture,” analyst Maria Rey cites the depreciation of the ruble against the euro as the reason. Another source, the online publication El Boletin, claims that Russians, especially civil servants, are persuaded not to go on vacation abroad, but to spend it “more patriotic” — at home. El Economista recalls the mass ruin of Russian travel companies this summer, which in turn undermined confidence in vacationing abroad. In turn, the realtor Novikova, analyzing the reason for the decline in real estate sales, argues that the Russians are “overwhelmed by fear”. Given the numerous “hints” from above, they fear that the Russian authorities may one day punish them for property available abroad.

Russia, holidaymakers
—
Spain
RSS
No comments yet. Be the first to add a comment!
Log in or Register to write comments
Related news