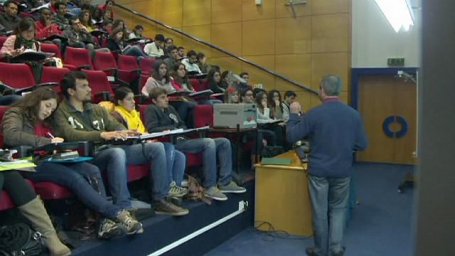 Spain is delaying making further cuts to Erasmus, a European scheme that allows thousands of students to study abroad.

Two years ago, the Spanish government reduced its contributions and it planned to take additional measures this year. But it is now pushing back the proposal till next year in the face of mounting criticism.

When asked about the apparent U-turn, the government’s spokesman Alfonso Alonso said:

“A lot of uncertainty is being created among students that are part of this programme and that had some expectations. I think that we have to listen and be aware of this situation.”

Over the last month, thousands of students have been protesting over wider cutbacks to education.

But Spain’s Education Minister has described her programme as a “concentration” of funds to help the less well-off.

“Students have to understand that they’re only going to miss 40 euros per month. A sacrifice for helping those students that are coming from low income families who thanks to this reasonable decision are now going to receive between 250 and 300 euros (per month).”

However, some estimates say around 10,000 Spaniards studying abroad will find themselves without funding – a matter that has given birth to an online campaign and a 200-thousand strong petition calling for the reforms to be abandoned.

Erasmus, students, study
—
Spain
RSS
No comments yet. Be the first to add a comment!
Log in or Register to write comments
Related news