Bastards! I want a vacation to Barcelona! 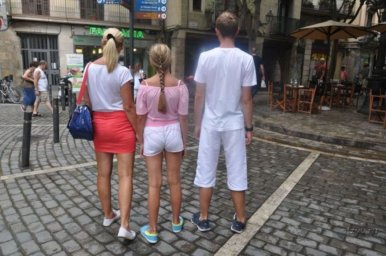 Passengers of the canceled Orenburg Airlines flight from Moscow to Barcelona reacted nervously to the news. Hundreds of people gathered at Sheremetyevo Airport to demand an explanation of the flight’s cancellation.

“Here you have brought a person to hysteria, now you’ll call an ambulance!” The passengers are indignant.

«I want to go to Spain, I have a vacation!» — the girl sobs, trying to influence the representative of the Orenburg Airlines airline.

“All complaints through the airline’s website,” the representative of Orenburg Airlines replies.

Orenburg Airlines, which previously announced the cancellation of 36 charter flights not paid by Ideal Tour on August 2, sent two flights from Sheremetyevo to Antalya and Hangzhou on Saturday, but canceled the flight to Barcelona, Victor’s airline representative said at the airport Doroshenko.

“Payment has also passed for Hangzhou. So now we are sending a flight to Antalya and then to Hangzhou. The flight to Barcelona 6903, which was due to leave at 6 in the morning, has been officially canceled,” Doroshenko said.

Passengers who haven’t arrived on a flight to Barcelona are awaiting a flight cancellation announcement, and also intend to receive official documents from the airline or airport about the reasons for this decision. The fate of two of today's flights from Sheremetyevo to Antalya remains unknown. The travel company «Ideal-tour» had problems with financing, the company owed a significant amount of money for performing charter flights. Between Orenburg Airlines and Ideal Tour a contract was signed for charter flights to 24 tourist destinations.

It is strange why the Russians do not rest in Crimea, but climb into Europe? Crimea is no longer needed? Well, they behave directly like locusts — they gnawed off and threw it — «I don’t go to the Crimea, but I go to Europe.»

vacation, Barcelona
—
Spain
RSS
No comments yet. Be the first to add a comment!
Log in or Register to write comments
Related news