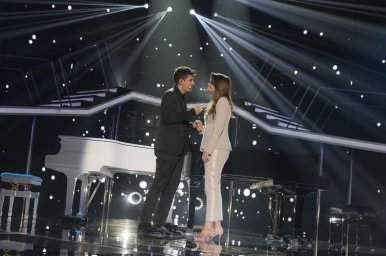 On February 5, the final round of the Operación Triunfo competition, which was held for the ninth time, was held, at which the winner of the 2017 — 2018 season was determined.

According to the results of the last round, the places were distributed as follows: Aitan Okanja, Amaya Romero and Miriam Roriges took the prizes, and Alfred Garcia and Ana Guerra took the fourth and fifth places. And the duo of Alfred and Amaya, who also won the qualifying show «Eurovision Gala», will go to the Eurovision Song Contest 2018 in Lisbon to represent Spain with the ballad «Tu canción».

Alfred García Castillo and Amaia Romero with the song Tu Canción will represent Spain at the Eurovision Song Contest 2018. For the first time their song was sounded on January 29, 2018 on the Operación Triunfo 2017 show, where it was chosen as the song that will go to the Eurovision music contest in neighboring Portugal.

From Spain to Lisbon there is a whole duet in which — Alfred Garcia and Amaya Romero. Alfred independently released several albums and wants to go to the cinema, and Amaya — perfectly plays guitar, pianoforte and drums. Together they will perform a sensual song Tu canción.

Amaya Romero, Alfred Garcia, Tu Canción, Eurovision
—
Spain
RSS
No comments yet. Be the first to add a comment!
Log in or Register to write comments
Related news