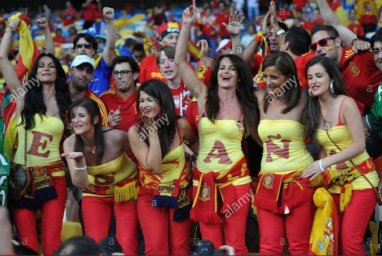 Although the sport is international, the traditions and climatic conditions of each country influence its development. Thus, for example, in Spain winter sports, such as ice hockey or skiing, are practically not practiced. Badminton, so popular in Russia, is not widespread either.

But football is very popular. It is so widespread that small soccer fields are everywhere. In them, futsal is practiced, a version of football in which five people participate per team.

Few guys don't dream of being Pele or Ronaldo. And if their backyard is too small, they go out to play, running the risk of losing the ball under the wheels of a car. Meanwhile, the elderly, most of whom are also fans of this sport, spend long hours hanging from the television. And not just men. When they broadcast the games with the participation of Barcelona, Real Madrid or the Spanish National Team, the streets are completely empty.

And by the way, tennis is also a favorite specialty among the Spanish. In large part this is due to the fact that there have been and are players who have achieved great success, such as Santana, Gimeno, Orantes, Bruguera or Arantxa, winners of many tournaments. Although in the past it was a sport practiced only by the upper classes, in recent years it has become a sport practiced by many people.

As they say, the important thing is not to win, but to participate.

Spanish supporters celebrate the 4-0 victory of their team after the UEFA EURO 2012 final soccer match Spain vs. Italy at the Olympic Stadium in Kiev, Ukraine, 01 July 2012

sport, Spain
—
Spain
RSS
No comments yet. Be the first to add a comment!
Log in or Register to write comments
Related
Regional Spain